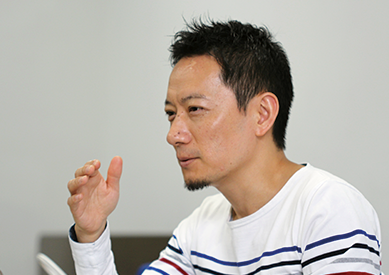 Understanding Different Cultures Through the Lens of Service and Hospitality

Associate Professor Yamauchi started offering a MOOC on customer service, "002x: Culture of Services: New Perspective on Customer Relations," in January 2016. He organized the course interactively with web-based discussions as part of a homework assignment.

Mooc Is Quite Formidable When You Are Not Familiar with It. But Once You Get Going, It Is Not as Hard as You Thought.

Before you offered a MOOC, had you already known about MOOCs?

I had heard of MOOCs, but I just had a general awareness from hearing it in the news. I didn't spend time inquiring about it or anything like that.

What did you think when you were asked to offer a MOOC? 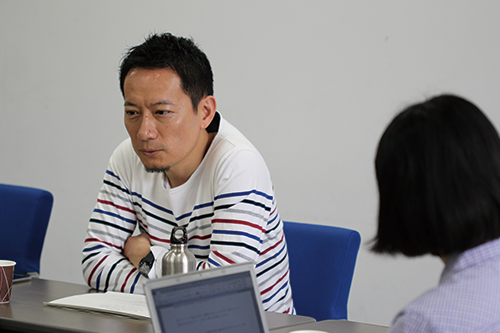 (Laughing) I sensed that I probably wouldn't be able to say no! I didn't think that offering a MOOC was a bad idea, but I had the impression it would take a lot of work. Yet I thought it would be a good thing to do, and if I was going to do it, I wanted to gain as much as possible from it.

What do you mean specifically by "a good thing"?

I mean that it would be a good way of transmitting ideas. In addition, Kyoto University was putting a lot of effort on MOOCs, so it would be a good thing to contribute to.
When I was asked to offer one, I was about to publish a new book, so I decided to use the MOOC to spread ideas from my latest research.

How do you feel after finishing the MOOC?

All in all, once I got used to it, it wasn't burdensome at all. However, before I got used to it ... (Laughing) recording the lecture videos was emotionally exhausting, for one thing. After we had taped five or six lectures, the process became more efficient. I wish we could have videotaped the trailer after I was used to it but the finished one had a great impact, so I'm happy about it.

Your trailer was received quite well even at the edX staff meeting.

In hindsight, it may have been a good thing that I wasn't accustomed to it. In addition, they made a banner based on the trailer, and recently I've been using it a lot in my presentations and web pages. In the end, a major advantage of creating lectures for a MOOC is that you can later use high quality materials again and again. 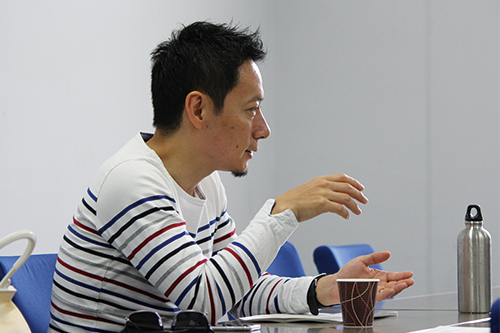 At the beginning I crammed too much information into one video. For a ninety-minute class, I crammed a corresponding amount of content into the slide deck. In a MOOC, however, a lecture video is about five minutes, so I can't talk about too many topics, and I need to narrow it down to only one or two topics. I didn't have any sense about that sort of thing at the beginning.
Then the students in a MOOC can view the video as many times as they want, so I took care not to be too long-winded. In a class or presentation, you need to repeat the same thing several times in different words, but for a MOOC that kind of redundancy is omitted. And because you first write down a script and spend time refining it, I can streamline the material.

So you produce the script after producing the slide materials?

Yes, I do. But when I produce the slides and then write the scripts, I gradually start to notice the parts that do not go together. I then fix the slides. So, I go back and forth between the script and the slides.

You used content that you had written in your new book to create the MOOC, but did you collect any new information?

First, I collected some new data. Specifically, I videotaped how two contrasting apparel shops, a casual one and an upscale one, dealt with customers and used that data in the MOOC. Study participants agreed that we would use the video data on the MOOC without anonymizing it, e.g., blurring the face and altering the voice. I think that worked very well for students.

It took me much longer because I took quite a bit of care in creating materials for the MOOC. I had to write a script and did several rounds of editing to make the material clearer. Then we had to shoot the videos, but the more I got used to it, the less it felt like a burden. What took the most time during the course was preparing content to be posted in the Problems and Homework threads. That was especially true because this time I introduced peer review, in which the students graded one another, so that took a lot of time. 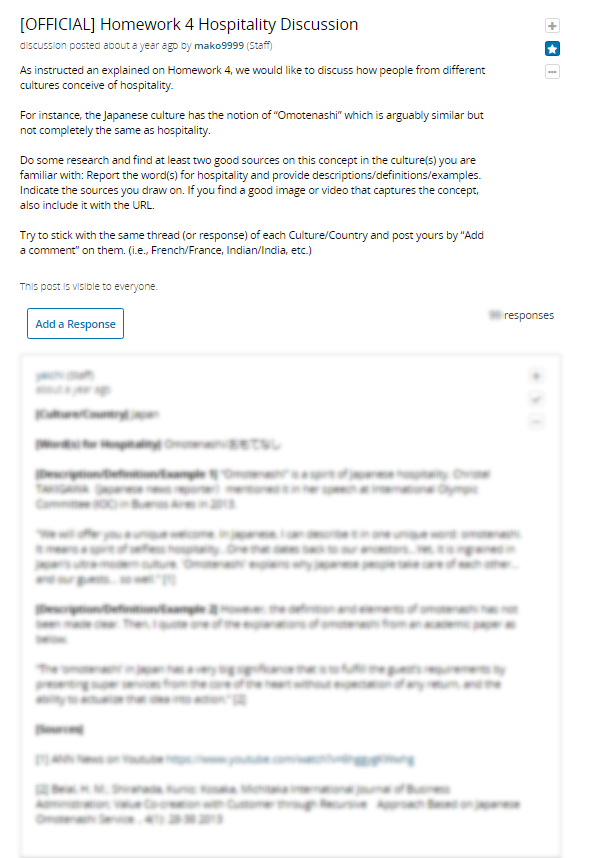 It was no different than reading SNS, so I didn't feel that it was burdensome. In addition, some very important questions were posted on the discussion forum. When there were questions about things that I couldn't cover during the lectures, answering them in detail on the discussion forum also allowed me to convey that information to the other students.
When I read the posts on the discussion forum, I felt that the students were quite engaged with the class. Among the comments were opinions that indicated that a student wanted to know a bit more. I witnessed on the discussion forum that in response to a certain question, some students exchanged additional references with each other. I thought these kinds of situations were wonderful, but at the same time I wished that I had provided reference materials ahead of time so that I was prepared to recommend them to students who were interested.

You assigned tasks that would make the students discuss their own cultures. Was that useful for you, whether in your own research or in teaching?

I thought the discussion went very well. It appeared to me as if the students all had quite a good time discussing the material. This assignment was to talk about the word "hospitality" in terms of their own culture, but the word "hospitality" is directly connected with ethics and ontology, and the students probably had not had a chance to discuss these matters. I gave this assignment thinking to myself it would be good to learn concepts of hospitality in various cultures. However, when I "opened the lid," there was much more: the assignment led to the students understanding each other's cultures. They learned that what is taken for granted in their culture was not so obvious in others. They learned there would be different perspectives from their own. It was really wonderful.

Finally, we'd like to hear your feelings about the course as a whole.

First of all, I'm glad I offered the MOOC, and I'd like other people to offer MOOCs. What was good about it? The fact that it was linked to my own research. Offering this MOOC was partly for the sake of university-level education, but that's not all. For example, when I talked to fellow researchers around the world about the MOOC, they used their own mailing lists to spread the words, and that led, for instance, to a case in which all the employees of a company in Singapore took the MOOC. I was in Singapore just at the time the course began and, during that time, I met with one of the employees, discussed various things, and formed closer ties. Being able to spread the ideas worldwide was one of the good things that came out of this experience.
Other than that, the trailer had an impact. When I went abroad during my sabbatical, I used it to introduce myself and people immediately understood who I was and became interested in my work. The trailer summarizes the nature of my research in an easy-to-grasp manner, so I'm very glad I produced it.

This time, your course was distributed for eight weeks. What did you think of the length?

Personally, I thought it was just right. If it were any longer, it might be exhausting given the nature of MOOCs.

Eight weeks corresponds to one unit, right? If the Graduate School of Management produces these kinds of MOOCs in the future, how do you think it will be possible to make use of them?

I'm thinking of making use of them in a flipped classroom. They can take lectures through the MOOC and we have discussions in the face-to-face portion of the class. That would be one conceivable format for the class. 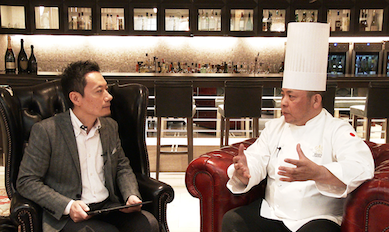