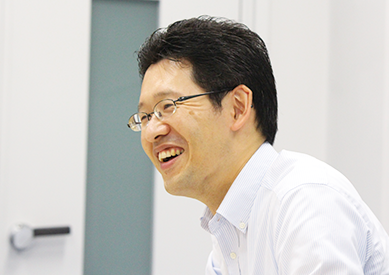 Using Manga to Teach Bioethics in the Midst of Cultural Diversity

As part of the international education delivery project established by the Top Global University Project "Japan Gateway: Kyoto University Top Global Program," Associate Professor Kodama began in March 2016 offering a MOOC called "006x: Ethics in Life Sciences and Healthcare: Exploring Bioethics through Manga." He looked back on that experience, focusing on the aspects that he had to especially consider given that the MOOC covered important topics in the field of bioethics.

A MOOC That Uses Learning Bioethics Through Comics

First, I'd like to ask what led you to create a MOOC. Did you already know about MOOCs when you were asked to offer one?

No, at that time, I didn't know anything. When they talked to me about it, I wondered what topics I should deal with, and then we started talking about using the book I had written previously, Manga de manabu seimei rinri (Learning Bioethics Through Comics), which uses comics to illustrate concepts. I had never taught a course on bioethics in a format that could quickly be converted to English, so it was an opportunity that came along at just the right time.

Up to that point, had you often used manga in your lectures?

I had used comics a couple of times, but I had never taught a class using this book. It was published in 2013, but I had had no opportunities to use it in class after that, so in that sense I was glad to be able to use it this time. 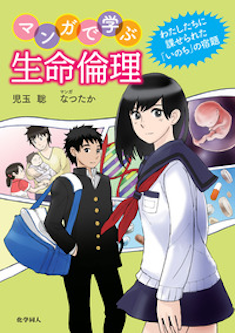 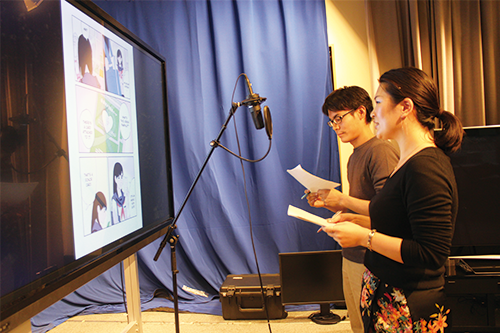 Recording the dialogue for the manga portion of the lecture video. Course staff members provide the voices for most of the characters.

What part of preparing this MOOC gave you the most difficulty?

I guess the most difficult thing was designing a course to be taught in English. Up to that point, I had used English at academic conferences and offered one-time classes in bioethics in English in Japan and overseas, but I had never taught a series of classes in English. When creating an English version of Manga de manabu seimei rinri, I took special care with translating the field-specific technical terminology. Mr. Kamm of the Graduate School of Letters carefully checked the English version, and that was of great help to me.
In addition, one of the things I was not used to was that in a MOOC, unlike a regular class, there are no students present, so during the time it is being recorded, you don't know how the students will react.

For your lectures, you devised homework using discussion forum and peer assessment. What difficulties were involved in creating it and what did you have to keep in mind?

It wasn't all that difficult to assign the actual homework problems, but I was very careful in taking cultural differences into account. Take, for example, the pros and cons of topics such as induced abortion and euthanasia. Even though they have not yet become major political problems in Japan, I was dealing with actions that are forbidden in some countries and have been the subject of major controversies in the United States. For that reason, I took great care in the way I asked for opinions on these topics. I could imagine to some extent how American and British students would react, but the students were not only from those two countries. A lot of people from various countries with diverse cultural and social backgrounds were taking the course, so, for example, it was possible that people from regions that take harsh attitudes toward abortion might be participating. Therefore, it was really difficult to plan the course taking into account students whose attitudes I could not predict. On that point, I plan to make use of the students' feedback in the future.

On that point, how did you feel when you actually saw the discussion forum after your lectures had started?

The first Homework assignment (Week 1 Homework 1) that Associate Professor Kodama assigned: students were supposed to share information about the laws and regulations concerning surrogacy and their own opinions on the discussion forum. The explanation of the problem (underlined) asks the students to respect the cultural and social diversity of the other students.

It was interesting because many kinds of people were participating, and people from a wide variety of regions posted messages. Among the messages that left an impression on me was one that asked, "By using manga as the material for your lecture, are you conducting the class for people who can't read books?" I think that manga is widely acknowledged in Japan and other East Asian countries, but this message indicates that there are still cultures where manga are something that you "graduate from" (grow out of) around the time you're a teenager. Of course, this is just one example, but the discussions on the forum made me consider a lot of aspects regarding these cultural differences or cultural variations.

How We Will Make Use of MOOCs in Our Regular Classes

Finally, may we ask you about your overall feelings about creating this MOOC?

I experienced the entire process of delivering a lecture on bioethics in English this time in the MOOC format. I think that was great.

In the process of doing so, did you gain any experiences or ideas that you might be able to adapt in regular classes? 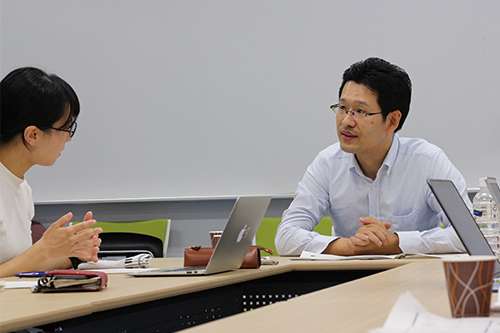 Recently, I taught classes only as the sole instructor, so based on this experience I've thought about possibly having TAs cooperate with me in various ways and have other instructors teach with me in a sort of relay arrangement to try something new.
But frankly I think that making use of these things in my current courses at this stage would be difficult. Before I came to Kyoto University, I emphasized group discussions, which are part of my regular courses even now. On the other hand, you can't do that sort of thing in a MOOC.

In that sense, I think that peer assessments, which I assigned in this course as a mechanism for having the students find out about others' opinions, was extremely beneficial, even though it wasn't a substitute for group discussions. There was a time when I thought of MOOCs as being in a separate category from regular courses, but I think it would be a good idea to think about how to make use of them in regular courses, or about a continuation or connection between the two.

What do you think about the possibility of using this course as one part of the Top Global University Project? Once you have created the content, that opens up the option of using it in your regular classes.

The necessity of teaching in English is a topic that has come up quite a bit even in the Graduate School of Letters, so I think I'll have to give it careful consideration.

Thank you for speaking with us today. 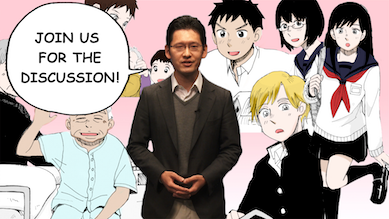