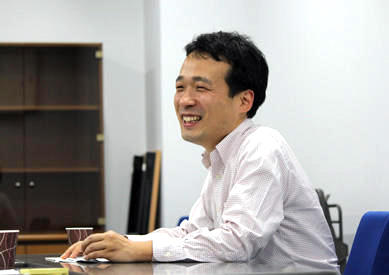 A Mathematics Course Readily Accessible to Anyone

Associate Professor Ito has been offering his MOOC "004x: Fun with Prime Numbers: The Mysterious World of Mathematics" since January 2016. This course is one piece of the international education efforts of the Top Global University Project "Japan Gateway: Kyoto University Top Global Program." The course deals with a topic that people might think it is difficult, namely prime numbers, but it has attracted a wide range of students of all ages each of the four times it has been offered.

What is the story behind your decision to run a MOOC? Please give us a frank account of your feelings when you were asked to offer a MOOC for the first time?

One day, someone asked me out of the blue, "Would you like to offer a MOOC?" I began the project without having enough preparation. I knew that Kyoto University had already offered open courses over the Internet, but MOOCs are distributed in a format similar to regular courses. For example, there's a syllabus as well as homework and a final exam. I hadn't known there were such online courses until I was in charge of one myself.

When you actually created a MOOC, were there any differences from a regular course in terms of preparation and production?

The way to select the topics of the course was basically the same. But the course preparation itself was really different. In a regular course, I can supplement explanations in response to students' reactions. On the other hand, with a MOOC, I have to create the content of the course while imagining ahead of time what sort of reactions I will get from the students.
In addition, I was told the people who register for edX courses range in age from their teens to their eighties, so I didn't know which group I should mainly focus on. I was really at a loss at first. In the end, I set the goal of taking people who had a high school-level knowledge of mathematics but had never studied it seriously and showing them how interesting it can be.

You made special efforts to make the course accessible to people who never studied mathematics seriously, such as giving quizzes on the history of math or assignments that require the students to post their favorite prime numbers on the discussion forum. I think that must have helped keep the students' motivation.

Do you sometimes use digital technology in your regular courses? 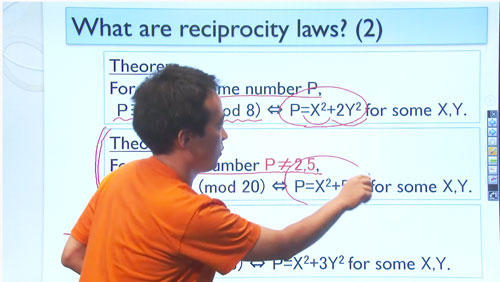 Yes. For example, when I give short-term off-campus classes and I need to present the content in a short period of time, I sometimes use PowerPoint. However, I hardly use it in my regular classes. That may be simply because I'm not used to using it in regular classes. After giving a MOOC course, I realized that in order to understand math, it is important for students to write down formulas and take notes on each step during the lecture. If they just see a series of formulas on a screen in quick succession, will they really understand it? I'm a low-tech type of person, and if there is a graph or picture that is difficult to write on the blackboard, I copy it onto handouts to supplement the lecture. I slowly explain the theoretical part using the blackboard and ask the students to take a look at the handout to supplement the explanation. That's how I do things in my regular courses.

Now that you mention it, you use an electronic blackboard very effectively in your MOOC. How do you feel about using digital technology in your courses?

This was the first time I had used an electronic blackboard, and I think it can be convenient, depending on how I use it. For example, I show the students what we call "the sieve method" of finding prime numbers, which is to write all the numbers on the blackboard and then erase the ones that are not prime. Doing that on the real blackboard takes time, so I find that it is more effective to prepare the table of numbers in advance on the electronic blackboard and show the students how to erase the non-primes.

I think a format that uses electronic blackboards, PowerPoint, and so on is effective when I give information to the students. It's just a part of the lecture to internalize theory and computation techniques. There is answer part of the lecture where the students have to write everything out by hand. In other words, it is important to combine what I can do with technology and the part I have to teach by traditional methods. In my regular classes, I mostly use the blackboard and handouts, and if necessary I ask the students to calculate things on the spot by hand.

Even in the trailer in which you present the content of your MOOC, you say that if the students have paper and a pencil, they'll be fine.

Yes, I did assign some calculation problems that were a bit difficult, but almost all of them could be solved with paper and a pencil. Some of the postings on the discussion forum were complaints, such as, "I can't do this kind of calculation by hand" or "I had the computer do the calculation." Even when problems appeared to be insoluble with just pencil and paper, I explained how to solve them in the following week, writing the formulas and numbers on the electronic blackboard to show that there was a trick to solve the problem. I used these little tricks to make the students sit up and take notice: "You mean that all I have to do is to use this method!"

I heard from some of the Japanese students that in the process of solving formulas, only a limited number of things were left on the electronic blackboard, so they were pleased that even in the MOOC, you gave your explanations with the solution methods left on the board, just as you do in your regular courses.

I think that's a valid opinion. Frankly, I still haven't considered using PowerPoint and an electronic blackboard in my regular classes. The classrooms in the Kyoto University Faculty of Science have four to six large blackboards on all sides, so I can stop in the middle of an explanation, return to a previous formula, and recall what I have said. "Speaking of that, we calculated this part like this." But when you're using an electronic blackboard, you can't use six screens at once, right? I wasn't fully aware of the importance of blackboards, but after I gave a MOOC course, I realized the effectiveness of blackboards as I use them in my regular classes.

I Think Being Able to Ask Questions Frankly and Have Interactions with Other Students Are Some of the Advantages of MOOCs.

Once the actual course began, there were a number of posts from the students on the discussion forum. What was it like to interact with students you couldn't see, unlike in a face-to-face course?

There were a lot of questions, weren't there?

Most questions were due to simple typos or misunderstandings or were things that the students could have found in the syllabus. My guess is the students who asked these questions understood all the content very well. That is to say, they've studied the content before, and besides that, they're studying it again in a MOOC. Sometimes, they ask a question like "This part of the explanation is a bit hard to understand, but what does it mean?" For this reason I wondered, "You understand it well, but you're still asking?" Still, since everyone sees everyone else's interactions on the discussion forum, I try to answer as politely and carefully as possible.

Don't you have any software tools or opportunities at hand to answer questions in a regular class?

Not particularly. For the students, it takes courage to ask a question during a lecture. University lectures have a lot of students, so it's quite hard to ask questions in front of other students. I think the ability to ask questions frankly that would be difficult to ask in a regular course and have the interactions among students are some of the advantages of MOOC courses.

MOOCs Are Extremely Powerful Tools for Familiarizing People with an Academic Field.

Now that you have some experience producing and distributing a MOOC, tell us if there is anything that needs improvement. 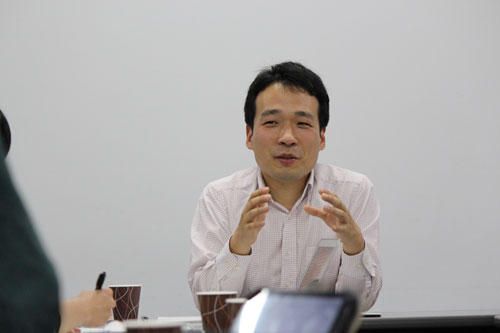 There certainly are some parts of the content that need improvement. In particular, when the first week was published, I saw the students' reactions on the discussion forum and realized there were some things I hadn't explained well enough. In a regular course, I can add extra explanations at the beginning of the following lecture, but with a MOOC, it's difficult to add explanation because it is involved in videotaping and editing, so I became increasingly frustrated. On the other hand--and this is just my personal opinion--university courses might be considered as one-way traffic. Yet, actually, there is some sort of unspoken communication between teachers and students. I realized that such communication is very important when I give my lectures. This MOOC was over in just four weeks, and I had no spare time to think about possible improvements.

Is there anything about the assignments you would like to improve?

I wouldn't know unless I were to conduct a careful analysis, but in this MOOC I included types of questions that I don't often deal with in the regular classes, such as "What is your favorite prime number?" For this reason, there were some students who were unsatisfied. Perhaps I should have included some harder questions. The range of students in a MOOC is so broad that it's hard to hit the right spot. I don't have an answer for your question even now.

In the survey, there were some students who responded by saying that they wanted to be assigned more difficult problems. But you don't know whether raising the level of difficulty would lead to students continuing to take the class, do you?

In the end, I think that a feeling of accomplishment motivated students to continue. For example, I assign five problems, and one of them is difficult unless you have background knowledge. But if I do not include an easy question that all the students can answer, such as asking their favorite prime numbers, many of the students will give up taking the course.
This course had thousands of students, and I think that's fantastic. A typical course at Kyoto University has about fifty students. Off-campus courses in large classrooms may have one to two hundred students. The MOOC attracted ten times as many as traditional courses, and there were students from over 150 countries. Moreover, I wasn't just giving one-way lectures for an hour; I also gave assignments and participated in discussions on the discussion forum. I think that MOOCs are extremely powerful tools for making people familiar with an academic field like mathematics, which they have few opportunities to learn properly. 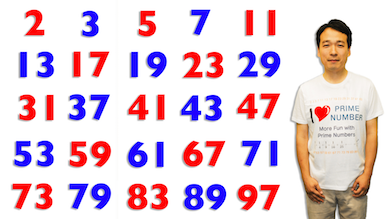